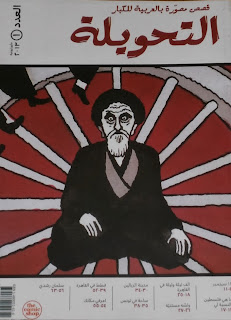 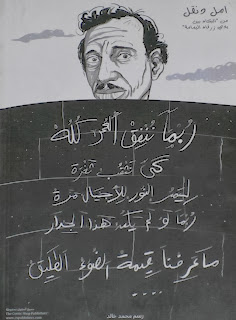 At the Kotob Khan, I found copies of Ta7weela, a new Arabic comic magazine that came out with its first issue earlier this summer. For the bibliographically-minded, here is the citation:

The subtitle is essentially the editorial programme: Ta7weela publishes stories (in the broadest sense), in Arabic (dto.), for grown-ups. I say 'stories in the broadest sense', because some pieces in the volume--like the one about garbage-collectors--are not really narratives, but graphic documentaries, if you will.

The idea of a magazine for grownups is not new, of course. In Egypt, there is TokTok magazine, which has been around since 2009, and there may well be other, similar ventures in the Maghrib (if you are aware of any, please point them out to me in your comments below). What distinguishes the two is that TokTok is a standalone venture, that  it has a certain amateurish charm to some (but not all) of its artwork, that its narratives are shorter, and that it is essentially humouristic. Ta7weela, on the other hand, is part of an array of publishing products that include acclaimed titles such as Metro by Magdy Elshafi (2012); that the artwork is professional throughout; and that it is far more serious in tone (think MAD vs. Persepolis).

Since we are talking about Persepolis: the striking cover image is taken from a piece about Iran, albeit a translated one. Indeed, much of the content in Ta7weela appears to have been published previously in other languages. Here are some samples of the content: 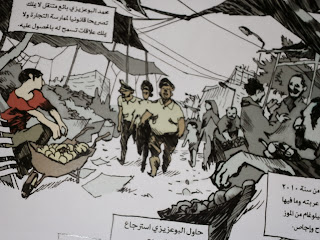 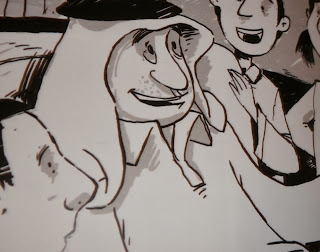 So the artwork is professional (as in, consistently well-produced), but does it add to the narrative experience? This is where the content of Ta7weela is somewhat uneven: in some pieces, the illustrations are rather bland, and add no visual appeal. A few pieces, however, make good use of the medium by providing imagery that enhances the narrative.

The final verdict: Noteworthy. One single issue is hardly enough to allow me to talk about a new trend, about a groundswell of interest in graphic novels; indeed, compared to the Francophone world where we have an entire industry devoted to la BD, including museums and libraries with tens of thousands of titles, the local production is negligible. Then again, the genre is new enough to Egypt to be of interest, and it is certainly a positive sign to see graphic novels prominently displayed in bookstores around Cairo. Will they catch on? I can't say, but I'll be watching out for the Comic Shops next publications ...

Posted by Mark Muehlhaeusler at 02:45